When Mark Zuckerberg declared “The future is private” at Facebook’s annual conference last year, it was seen as an odd—perhaps even laughable—statement. Facebook has a long history of privacy scandals, one of which led to an FTC consent decree and a record breaking $5 billion fine, another of which, the Cambridge Analytica controversy, is the subject of articles, books, and films. Privacy is not exactly what Facebook is best known for.

However, Zuckerberg’s declaration actually made perfect sense. The digital town square Facebook had created was fundamentally at odds with the informality, privacy, and ephemerality of offline social interactions. For Facebook’s first 15 years—especially after the introduction of the newsfeed—interacting on it was the equivalent of having your living room transported to a stage in the middle of the town square where you were recorded and archived. That’s an unnatural way to structure social life. Many people prefer the intimacy of communicating one-on-one or with a few friends and family. They don’t want a permanent, public record of what they've shared. 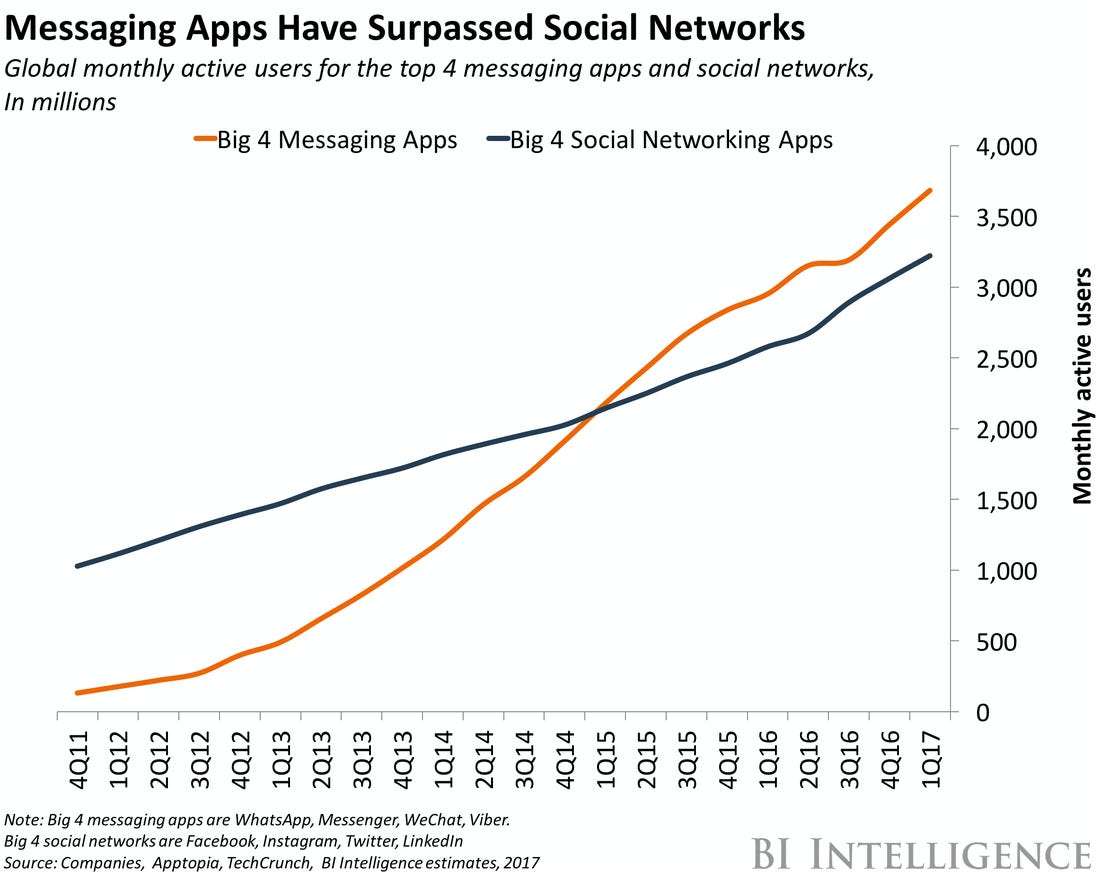 Where have people turned instead? Chat apps. Think about where you go to comment on breaking news, joke with friends and family, and share photos from your weekend. Increasingly, it’s apps like WhatsApp, Discord, iMessage, and Snapchat.

Chat became a popular form of interaction online in the early 1980s, with programs like “talk” that allowed users of the same Unix systems to chat with one another, and “ntalk” that allowed chat between different computers on the same network. In 1988, Finnish programmer Jarkko Oikarinen created Internet-Relay-Chat, an open, decentralized protocol that allows users to chat in groups called “channels” and one-on-one. IRC was quickly joined by platforms which used proprietary protocols and were able to offer superior user experiences like ICQ, AIM, and Yahoo Messenger. However, this meant that people had to use multiple IM clients to communicate with friends across different platforms (similar to how social media works today). Jabber (now called XMPP) tried to address this by creating a protocol that used gateways—connections to other messaging protocols—to enable multi-protocol clients. Using Jabber, you could access all your messages across different platforms using a single client (this is similar to what Gobo.social is trying to achieve with today’s social media platforms). However, the rise of mobile phones and companies’ desire to create walled gardens meant that multi-protocol clients largely fell by the wayside. Today’s dominant chat platforms run on proprietary protocols and explicitly discourage interoperability with other services and clients.

WhatsApp, Discord, iMessage, Snapchat, Slack, Telegram, Signal and other popular chat platforms fall under what we will call “chat logic”. The most important features of “chat logic” are privacy, ephemerality, and community governance. They are what make chat platforms more like a living room than a town square. We can map these characteristics on to the axes we’ve been using to understand social media platforms:

Most chat platforms rely on proprietary protocols and discourage interoperability. This helps the platforms monetize and control their user experience. However, as we saw with Jabber, for as long as instant messaging has been around people have tried to find ways to build clients that fit their needs and still allow them to communicate with the wider network. For example, in Africa, alternative WhatsApp clients that are created by reverse-engineering WhatsApp are actually more popular than Facebook. This is a great example of adversarial interoperability which is explained by Cory Doctorow as “when you create a new product or service that plugs into the existing ones without the permission of the companies that make them.”

Revenue model. There isn’t a settled revenue model for chat platforms. Some rely on donations like Signal and Telegram. Others rely on subscriptions like Slack (and formerly WhatsApp), ads like Facebook Messenger and Snapchat, or paid features and add-ons like Line and WeChat. Because chat applications are primarily used on mobile phones, charging through the Google and Apple app stores opens a revenue stream not easily accessible to social networks accessed primarily through browsers.

Governance. Because chat logic is about small groups, governance is handled by the community. Platforms that use local storage and/or end-to-end encryption like WhatsApp, iMessage, and Signal are unable to centrally moderate by design. Platforms that use cloud storage either choose not to moderate except in extreme circumstances like Telegram, or set baseline rules that are then extended by the community like on Discord. Decentralizing governance means that chat platforms cater to a diverse array of communities with different norms, standards, and purposes. As Discord puts it, chat platforms are great “[w]hether you’re part of a school club, gaming group, worldwide art community, or just a handful of friends.”

On platforms that cater to smaller groups like iMessage, WhatsApp, and Snapchat, moderation is essentially an extension of offline social life. People can be “ghosted”, removed from chats, and blocked for a number of reasons, but there is rarely a formal code of conduct for what speech is permitted or banned. Frequently smaller group chats are made up of people who know each other offline, which can incentivize good behavior.

On platforms that cater to larger groups like Discord and Slack, there are designated “channel” administrators (similar to subreddit moderators) who handle moderation and create formal policies which they then enforce. Larger group chats suffer from many of the same content moderation problems traditional social media faces. For example, Discord hosted a number of far-right chats which were used to plan the deadly Charlottesville protests in 2017. Additionally, large WhatsApp groups have been blamed for inciting mob murders in India.

Small group chats seem to avoid some of the moderation problems that plague many social media platforms. But as groups get larger, people are less likely to know each other in different contexts, and discussions can get out of control. Some of the WhatsApp groups that have been blamed for inciting violence had 100 or more members, which combined with easy message forwarding means they may have functioned more as a broadcast and amplification service than a private space for discussion.

Chats are private by default—you usually need an invitation to join one. This means you can be fairly confident that what you share will only be seen by other people in the chat, giving you the freedom to be yourself and connect naturally. Chats are also ephemeral. Some platforms enforce this directly, like Snapchat and its disappearing messages. However, chats are also inherently ephemeral because they are usually real-time and typically high volume. Just like you don’t remember the majority of your offline conversations, most online chats are quickly forgotten. Additionally, there isn’t an easily accessible public archive of your messages that could be used against you. Remarks made on chat platforms will usually fade into obscurity, and capturing and reposting chat transcripts is a major violation of norms in many chat communities.

The evolution of chat logic spaces in parallel to more permanent and asynchronous social media spaces is likely a positive development. We shouldn’t have to subject ourselves to the competitive, political, and highly visible digital town square when we are trying to hang out with friends and family or organize in small groups. That’s what living rooms are for.

However, as chat logic platforms become the dominant spaces in some online ecosystems— particularly in developing nations, and in nations with large diasporas like India—they may act as powerful amplifiers and broadcasters. At that point, the advantages of chat logic—ephemerality, privacy, and speed—can become dangers instead of benefits. High velocity weaponized misinformation, spread through channels that can’t be easily studied, is a nightmare for scholars of hate speech and disinformation.

Some chat platforms are trying to stop living rooms from turning into de-facto public squares by limiting their size and virality. Whether users accept these restrictions, or whether they simply move to less regulated spaces may determine how the living room/public square tension is resolved going forward.

Says public has an overriding interest in hearing from political leaders

When you’re infected by Pegasus, spies effectively hold a clone of your phone – we’re fighting back

New DOJ Regulations Are a Victory for Press Freedom, But More Work Remains

Spyware and the Press