First implemented in 1970, the Department of Justice’s news-media guidelines were meant to restrict the use of certain investigatory tools, like subpoenas and court orders, that might “unreasonably impair newsgathering activities.” The information sought by the DOJ had to be “essential” to an investigation, and the agency must have tried all other “reasonable alternative[s]” to obtain it. The agency was also generally required to give affected journalists advance notice of the surveillance.

Despite these rules, the Trump DOJ nevertheless obtained court orders for communications records of eight journalists, delaying notice until after the fact. The past month brought a series of revelations that, under the Trump administration, the DOJ had secretly seized communications records of three Washington Post reporters, a CNN correspondent, and four New York Times reporters to try to identify their sources.

President Biden called this surveillance “simply wrong.” Following his comments, however, The New York Times revealed that Biden’s DOJ had continued to seek its reporters’ email records long after the change in administration. (The White House said it did not learn of this until the day The Times article was published.) After fresh outrage over The Times article, the DOJ announced on Saturday that it would no longer “seek compulsory legal process in leak investigations to obtain source information from members of the news media doing their jobs.”

This is a significant improvement to the DOJ’s previous approach. Still, there are questions to be answered. When will the DOJ officially update its news-media guidelines to reflect this change? And as The Times noted, the DOJ’s statement appears to leave some “wiggle room” surrounding the circumstances in which the policy applies, limiting it to when journalists are “doing their jobs.” What exactly does this mean?

A final critical question remains. The DOJ’s new policy—just like the previous guidelines—only applies to “members of the news media.” But who counts as a member of the news media? A document recently obtained through a Freedom of Information Act lawsuit filed by the Knight First Amendment Institute at Columbia University and Freedom of the Press Foundation, our respective organizations, shows that the DOJ’s internal criteria give the agency substantial latitude when making that determination, raising concerns that some newsgatherers will be denied protection.

While it seems clear that the DOJ reasonably considered The Washington Post, CNN, and The New York Times reporters to be “members of the news media,” the news media guidelines do not actually define that term—creating uncertainty about whether the Biden administration’s new moratorium is limited to “traditional” news media or whether it also applies to those engaged in less traditional newsgathering, like bloggers, newsletter authors, or other independent journalists who don’t fit neatly within the traditional mainstream news-style rubric. The FBI’s Domestic Investigations and Operations Guide defines “news media” as “an entity organized and operated for the purpose of gathering, reporting or publishing news,” and expressly notes that bloggers don’t qualify. But this working definition is specific to the FBI’s internal policies, and it was unclear whether the rest of the DOJ was also using this definition when applying the news media guidelines.

We submitted a FOIA request in October 2017 seeking information about how the guidelines operate. In response to this request, the government released a trove of information we’ve previously described, but it also redacted certain critical information.

In particular, the DOJ redacted part of its “News Media Policy Consultation” form, which lays out the “relevant facts” that the agency considers when determining whether someone qualifies as a “member of the news media.” It argued that revealing that information would harm the ability of DOJ attorneys to conduct investigations and prosecutions. The district court rejected that argument, ordering the DOJ to release the form. The unredacted form contains a list of 12 factors. 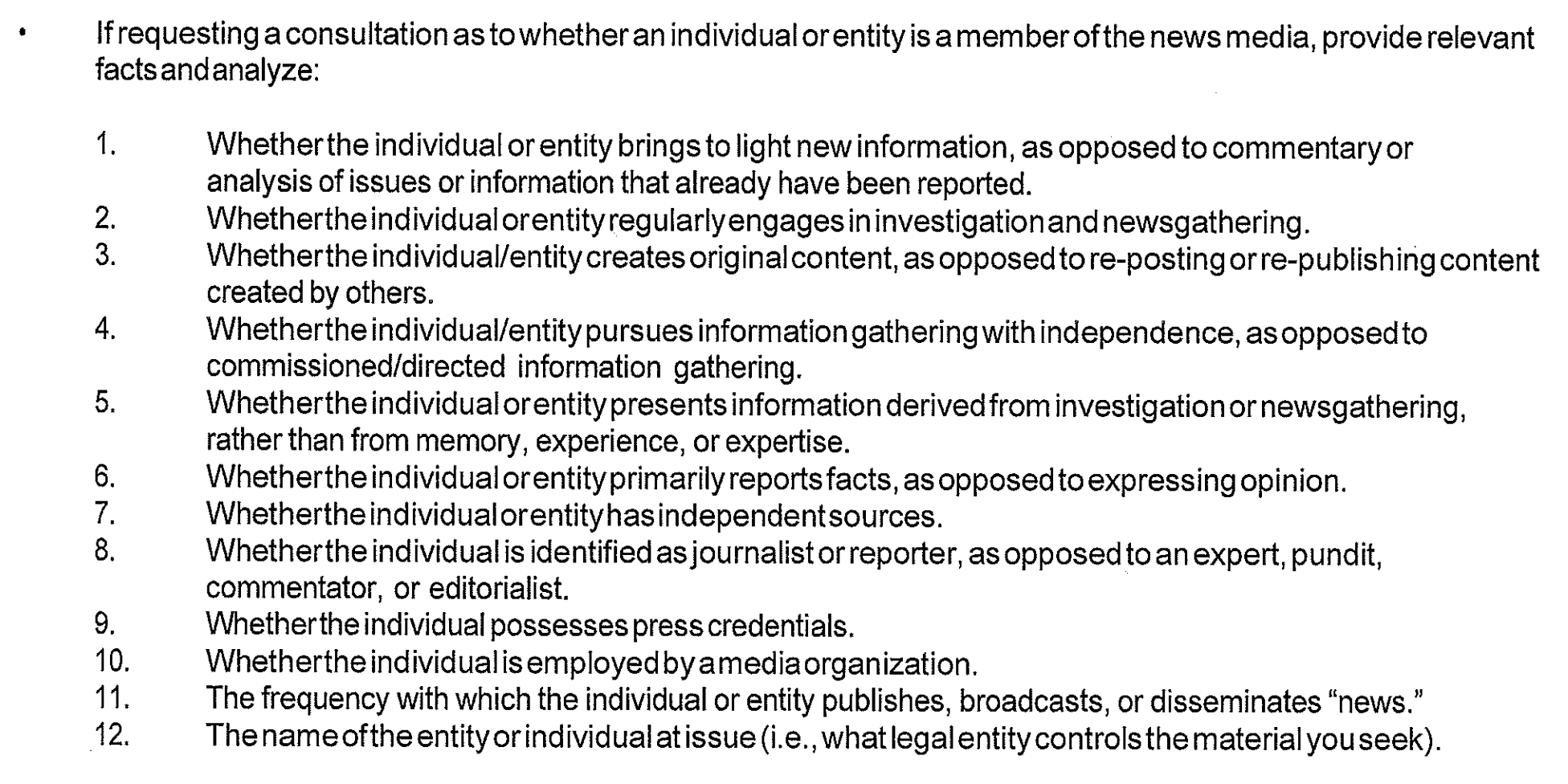 These factors raise at least two serious concerns. First, these malleable criteria give the agency significant discretion to determine who qualifies and who doesn’t, creating the risk that the protection of the new policy will be granted only in unduly narrow circumstances. The DOJ considers, for example, whether the subject of the planned surveillance “primarily” reports facts (No. 6), whether the person “regularly” engages in newsgathering (No. 2), and “the frequency with which the individual or entity publishes” (No. 11).

This phrasing suggests that the agency may exclude from protection individuals or entities that do engage in some amount of investigation and newsgathering, but perhaps just not with the regularity the government deems sufficient.

The criteria also hint that the DOJ may be drawing unjustifiable lines between “traditional” media and newer forms of independent journalism like blogs and newsletters. The criteria ask if the person is employed by a media organization (No. 10), has press credentials (No. 9), and whether the person’s focus is “bring[ing] to light new information,” rather than analyzing information “that already ha[s] been reported” (No. 1). The lack of clarity around how these factors are weighed is unsettling, especially considering journalists like Matt Yglesias (formerly of Vox), Casey Newton (formerly of The Verge), and Charlie Warzel (formerly of The New York Times), who eschew more traditional media outlets for the editorial freedom of Substack.

Did they inadvertently sacrifice the protections of the DOJ’s news media guidelines—and the Biden administration’s new prohibition—by shifting their mode of distribution? Or would their original content (No. 3), independence (No. 4), and frequency of publication (No. 11) be enough in the eyes of the agency?

Without any indication of how the DOJ weighs and interprets each of these factors, it is difficult to predict whether any given individual will qualify as a member of the news media and thus benefit from the protections of the Biden administration’s new moratorium. To be clear, a range of the criteria need not necessarily be a bad thing. The DOJ could use its discretion to broaden, rather than narrow, the scope of the protections. But based on how the document we obtained is worded, and without more information from the DOJ, there is certainly reason for concern.

The revelations that the DOJ secretly obtained the records of The Washington Post, CNN, and The New York Times reporters are a stark reminder that the DOJ’s protections for the news media can be changed or reinterpreted with any administration. That’s why Congress should codify the DOJ’s newly stated policy into law. But for some involved in investigation and newsgathering, an even more pressing issue is whether these protections apply to them at all.

Anna Diakun is a staff attorney at the Knight Institute.

Trevor Timm is the executive director of Freedom of the Press Foundation.

This article originally appeared at CJR.org and is reprinted with permission.

Says public has an overriding interest in hearing from political leaders

When you’re infected by Pegasus, spies effectively hold a clone of your phone – we’re fighting back

New DOJ Regulations Are a Victory for Press Freedom, But More Work Remains

Spyware and the Press