When progressive lawyer Sanjay Hegde had his account suspended twice by Twitter, it sparked a national discussion about Twitter’s moderation practices in India. Many argued the platform discriminated against minorities, particularly Dalits (formerly untouchables), citing routine suspensions for activists and writers while trends started by Hindu nationalists like #BoycottAllMuslims were allowed to continue. In response, a number of Indian Twitter users shifted to mstdn.social, a server (“instance”) on Mastodon, a decentralized alternative to Twitter.

This sequence of events—a group finds dominant platforms unsuitable (often due to bans) and decides to migrate to an alternative which promises autonomy—is a common way users migrate to decentralized social media platforms like Mastodon. In fact, these marginal groups make up a large part of their userbase. Some of the most popular instances on Mastodon, with hundreds of thousands of users each, were created through a similar cycle: one instance hosts the hateful far-right community Gab, while other instances are dedicated to lolicon (sexually suggestive drawings of children), and another instance serves as a replacement for Backpage, a community for sex workers. Decentralized platforms make it possible to create online communities with all sorts of different rules while retaining the ability to interoperate with existing networks.

As we’ve begun our work on mapping social media, several alternatives to “Facebook logic” have become clear. Mastodon is an example of a platform that falls under what we will call “decentralized” logic. This group of platforms uses decentralized technology such as federation or peer-to-peer protocols. Federation means that users interact with an external server like when you use Twitter or Facebook, but instead of being limited to a single company anyone can run a server that interoperates with the network, giving users more providers to choose from. Peer-to-peer protocols make everyone’s device a server, completely decentralizing the network. Relying on decentralized technology means that these platforms typically emphasize autonomy and privacy. This is enforced by design—there is no central entity that controls user data, meaning centralized governance and surveillant advertising in the tradition of Facebook are essentially impossible. (This lack of control has downsides, as we will explore below.) 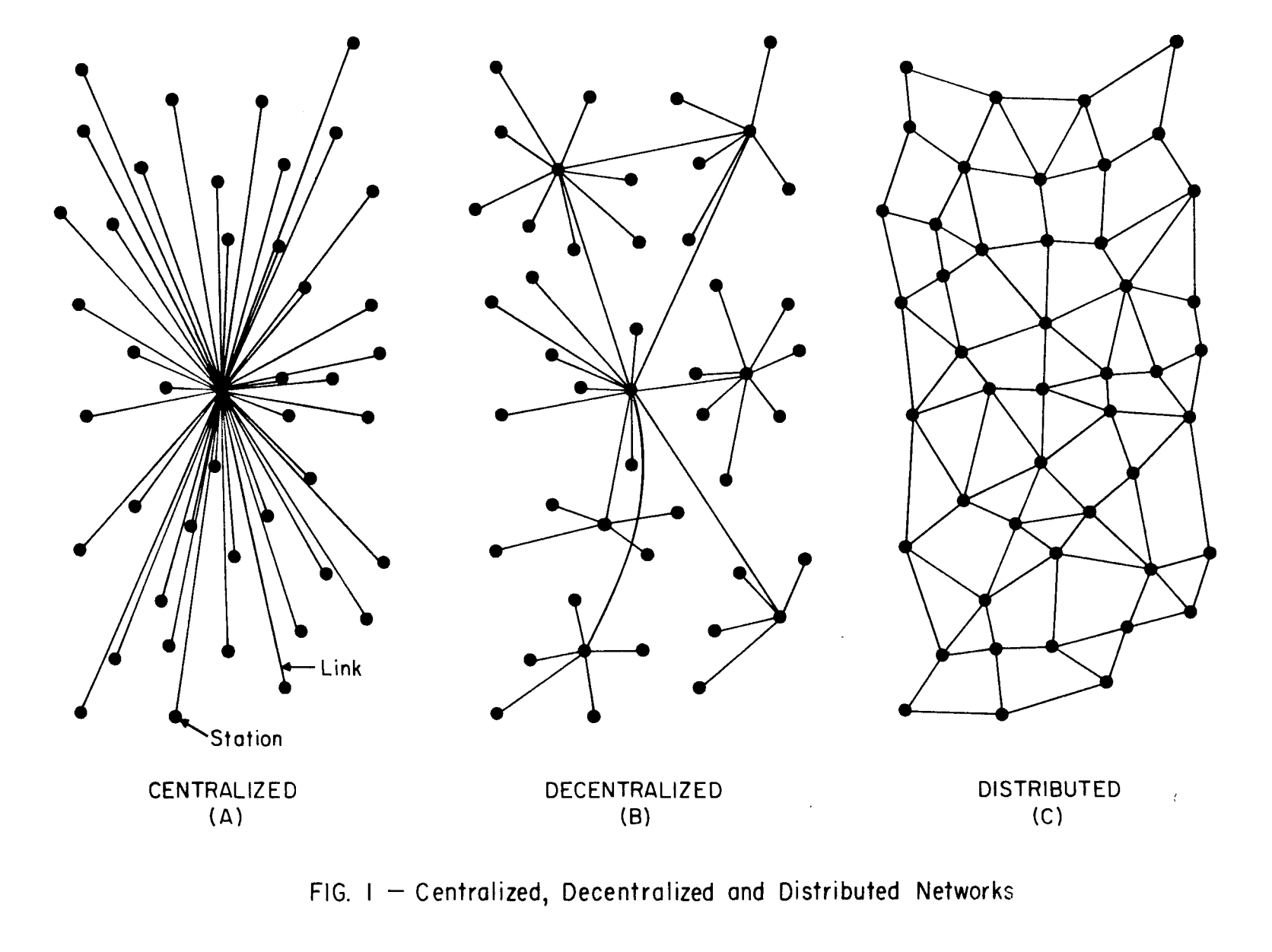 Decentralized platforms may be worth a close look in the wake of the recent controversy over Twitter and Facebook’s reactions to a New York Post article about Hunter Biden. Twitter took the “nuclear option”, preventing people from linking to the Post article and locking accounts of those who posted links. They later backed down from this stance, changing a policy on hacked materials.

Proponents of decentralized platforms like Mastodon would likely argue the situation highlights exactly why we need alternatives to Twitter or Facebook. Instead of one company dictating the rules for everyone, on decentralized social media a wide array of instances would have reacted in their own ways. Some might have banned posts with the link, but others would have chosen not to, allowing anyone to share the link. Others may have allowed it to be shared but inserted context about the story with each post. Users upset with their instance’s handling of the story could move to a different instance without losing access to the wider network.

This gets at the heart of the argument for decentralized platforms which can be summed up like this: What if social media worked more like email?

Email is an unsung hero, allowing people to send rich messages to anyone with an internet connection. Even more impressive in our age of walled-gardens is that you can use a wide variety of competing services to send and receive messages. You can send email from an Outlook account to a Gmail account. You can leave Gmail but still use your Gmail account with Apple Mail. You can use a service that offers unique functionality and features like Hey!, Superhuman, or Protonmail. You can take advantage of any number of third-party apps like Boomerang, SaneBox, and MixMax. As a result of email’s ubiquity and usability, it’s used as an authentication for virtually all other internet tools, and it’s become a hip new form of personal publishing with the rise of email newsletters.

Proponents of decentralized social media argue that it takes us back to an earlier, better era of the internet where “protocols, not platforms” dominated. They contend decentralization will give users control of their privacy and enable more speech while minimizing the impact of trolling, hate-speech, and disinformation. Currently, (as we saw above) the qualities of decentralized platforms largely appeal to people who find the dominant platforms unsuitable. Going forward, maintaining a significant userbase and finding a sustainable revenue model are likely the biggest challenges to the success of these platforms.

Using our axes, we can analyze what makes decentralized logic distinct:

Technology. Decentralized platforms register users, host content, and store user data with decentralized technology like federated servers or peer-to-peer protocols. For example, Mastodon uses a federation protocol called ActivityPub which standardizes client-server and server-server processes for social media. This is what allows different Mastodon instances to communicate with each other and also enables the “fediverse”—platforms who use ActivityPub (or other open protocols) and can thus interoperate. The fediverse started with GNU social and now includes over a dozen platforms like Mastodon, PeerTube, and Freindica. Peer-to-peer protocols offer similar features. Planetary.social uses the Secure Scuttlebutt protocol which is a peer-to-peer “gossip” protocol. User data and content are stored locally and Planetary.social users can communicate with anyone using Secure Scuttlebutt—even if they don’t use the Planetary.social platform.

Revenue model. Decentralized platforms often rely on donations and/or subscriptions for their revenue. For example, Mastodon founder and lead developer Eugen Rochko currently receives via Patreon about $6k/month to pay himself and fund hosting and moderation for the mastodon.social instance. Meanwhile, Planetary.social relies on subscriptions and venture capital. Finding sustainable revenue models for decentralized platforms is an open problem and a significant barrier to growth and sustainability. Developers need incentives to create compelling platforms and because decentralization (along with the entrenched positions of the dominant platforms) effectively rules out targeted advertising, new revenue models will have to emerge that can support sustainable growth.

Ideology. The main goal for these platforms is to provide social media with autonomy and privacy for everyone. Often, they are created due to disillusionment with the status quo. For example, Eugen Rochko created Mastodon to work the way he “wishes Twitter would.” Diaspora was built in response to a talk by Eben Moglen which described centralized social networks as “spying for free.”

Governance. Governance is handled by the community on decentralized platforms. On federated platforms like Mastodon, every instance has its own set of rules which are enforced by instance administrators. On peer-to-peer platforms like Manyverse, users control moderation largely by blocking other users. Some platforms like Planetary.social offer centralized moderation on top of a peer-to-peer protocol, but that moderation only applies to users of Planetary.social—moderated content is still available to users of other platforms built on the same protocol. Because no central entity can enforce moderation for the whole network, decentralized platforms that take trust and safety seriously often have to rely on indirect methods of moderation. For example, to be listed on Mastodon’s official site, an instance has to agree to follow the Mastodon Server Covenant which lays out commitments to “actively moderat[e] against racism, sexism, homophobia and transphobia”, have daily backups, grant more than one person emergency access, and notify people three months in advance of potential closure. These indirect methods are meant to ensure that most people who encounter a platform have a safe experience, even without the advantages of centralization.

Decentralizing governance means that a diverse array of communities with different norms and standards can arise. For example, Mastodon is home to instances with strict harassment policies while also being home to the instance that hosts the vitriolic and far-right Gab. This is sustainable because users and servers can choose who to connect with. So, when Gab forked Mastodon or ISIS recruiters joined Diaspora, most servers simply blocked all content originating from the offending servers and accounts. Gab users can see their server and the few that are willing to federate with it; the rest of the Mastodon universe has functionally closed themselves down to Gab and its content.

This governance structure means that the community a user belongs to largely determines what they can and can’t see. Some have argued this makes decentralized platforms more prone to “filter bubbles”. However, it doesn’t seem like they are any more prone to filter bubbles than the dominant centralized platforms where content is determined by a user’s community (i.e. friends, follower lists, subreddits) and algorithms tuned for engagement.

Affordances. The affordances on these platforms vary and largely mirror the dominant platforms: Mastodon is a Twitter clone, PeerTube is a YouTube clone, and Planetary.social looks somewhat like Facebook. As Planetary.social puts it, these platforms aim to provide experiences “that people want to use that works as much as possible as they expect, but which is backed up by better values and technology.”

A Safe Harbor for Platform Research

Lies, Free Speech, and the Law